Registration for the best bodyboard event in the world, Gran Canaria Fronton King, has been opened. As of October 12, the world elite of the bodyboard meet to compete in what is considered the best wave of the planet for bodyboarding, all in a unique environment on the shores of the municipality of Gáldar and in infrastructures that give priority to safety and the comfort in the exclusive areas for competitors, coaches and not forgetting that wonderful audience that comes every day to see it live.
Do not miss the opportunity to make history and be part of the great poster of athletes that each year demonstrates its level with the best of this wonderful sport.
Good luck to everyone!
You can register at frontonking.com 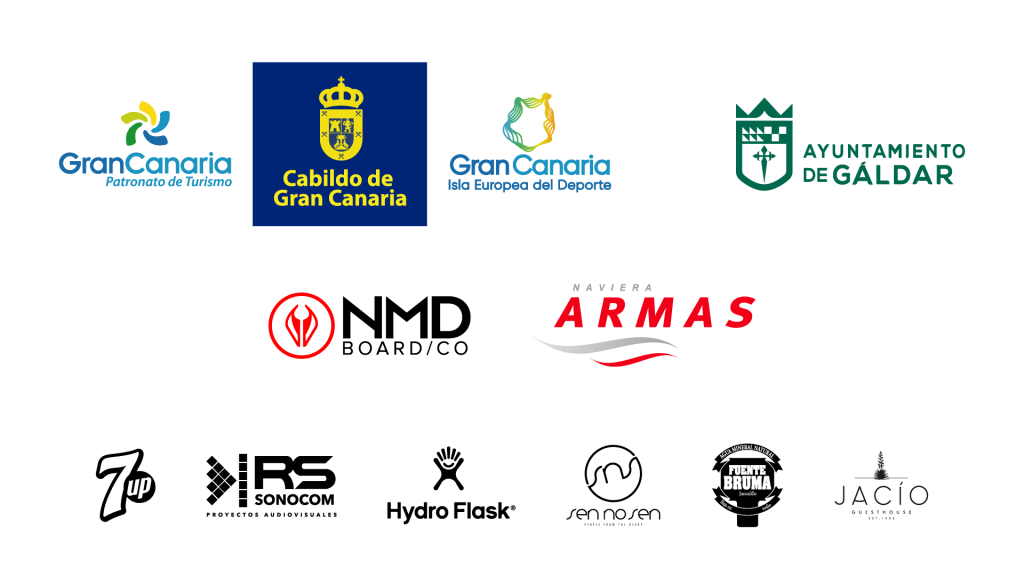 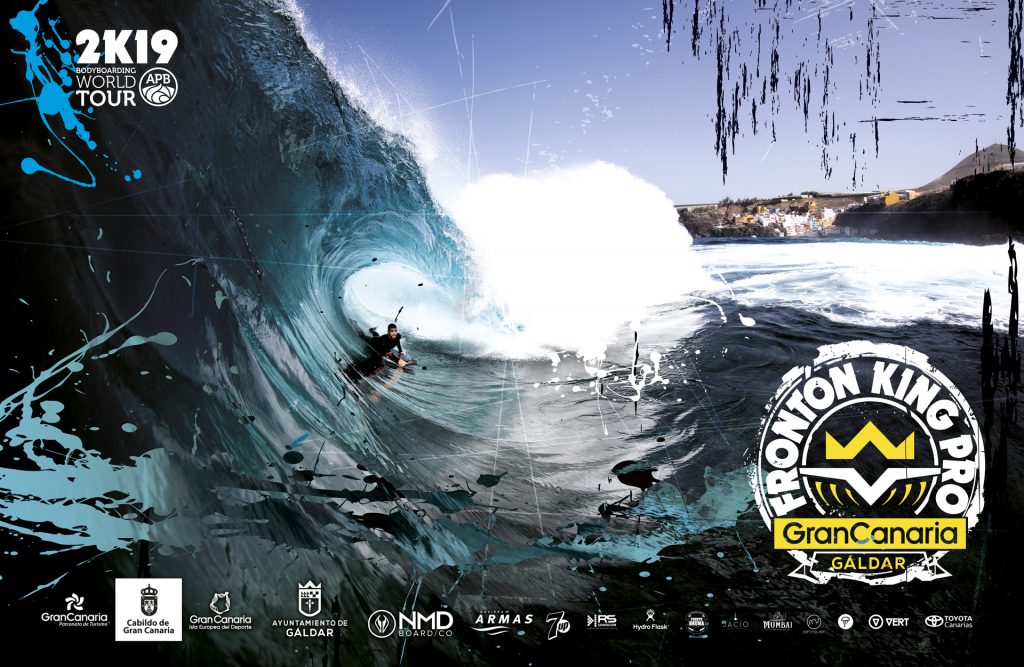 We present you the official poster of the most anticipated bodyboard event of the year.

On this occasion it is starring the local athlete Jonathan Vega, who obtained the second position in the 2018. Edition

From Fronton King we want to thank the support of all the sponsors and collaborators that one more year make this great event possible in Gran Canaria.

This year fronton king is again proof of the world circuit apb tour in the open and feminine categories. This will focus on Gran Canaria the elite of this sport crowning the champion and world Champion 2019.

Remember, you have an appointment with the best world bodyboard from 12 to 26 October in gáldar, Gran Canaria.

The strength of the El Frontón wave has reached the classrooms today, thanks to the visit of some of the world’s leading bodyboard figures of the moment. The students of 3rd and 4th of the E.S.O. from the Omayra Sánchez Compulsory School of Education, in Marzagán, they have had the privilege of personally meeting riders of the likes of Hawaiian Jeff Hubbard, three times world champion, Ayaka Suzuki and Jared Houston, current world champions in women’s and men’s categories respectively , the Frenchman Pierre Louis Costes, who currently plays the title in the Gran Canaria Frontón King Pro 2019, the German based in the islands and world champion Alexandra Rinder, and the outstanding Canarian rider Sergio Quevedo. 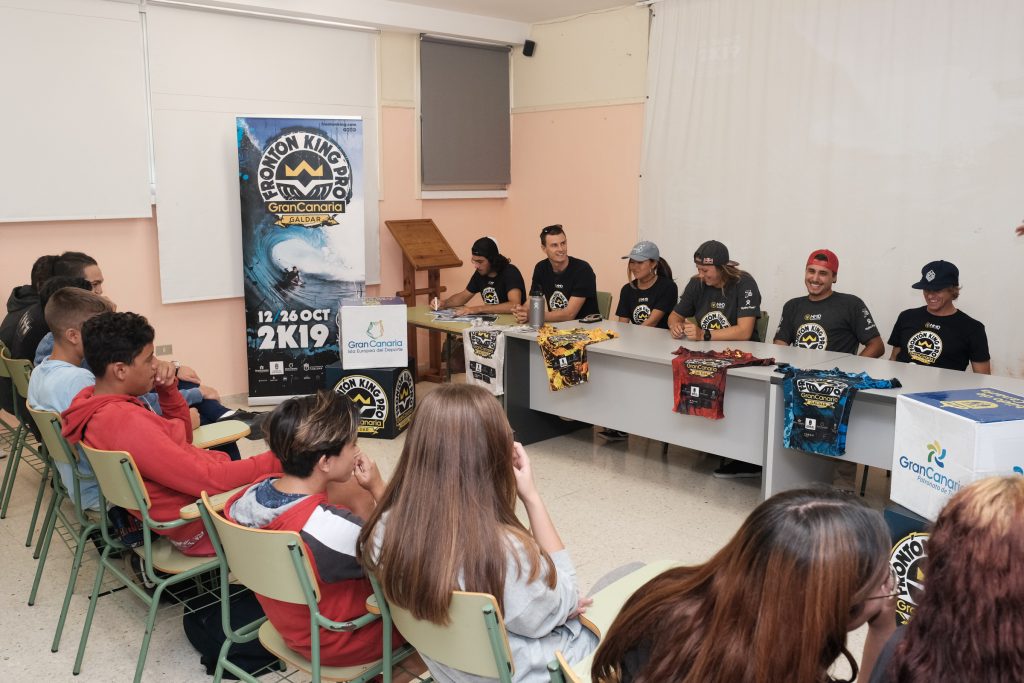 The organization of the Gran Canaria Frontón King Pro 2019, the last test of the World Bodyboard Championship, together with the Insular Sports Institute of the Cabildo de Gran Canaria work every year to bring the bodyboard to the schools and institutes of Gran Canaria. On this occasion, a large representation of the first figures of the world circuit has visited the C.E.O. Omayra Sánchez, in Las Palmas de Gran Canaria, surprising students between 14 and 15 years old, who have not stopped photographing themselves with their idols and asking them for autographs. 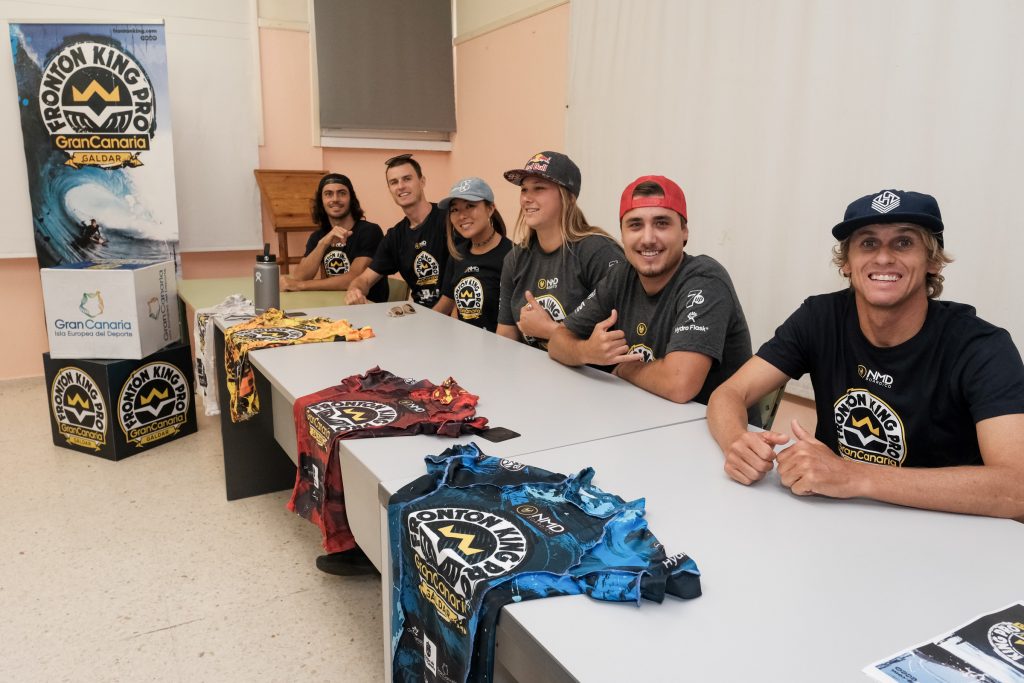 The boys have been able to enjoy some of the best images that the Frontón King has left in previous editions, with which they have learned what a competition is like and what the famous Frontón wave is like. Then, each of the athletes has told in first person his experience in the world of bodyboarding, how is his life, why he likes to compete or what reasons have led him to choose this sport. And the students have had the possibility of asking them all kinds of questions afterwards. Most of them wanted to know what has been the biggest wave they have surfed, if they have had any major injuries competing, or how they would advise them when they started in the world of bodyboarding. All of them have answered without losing their smile and very grateful for the warm welcome. In the same way, the organization of the Gran Canaria Frontón King Pro 2019 and the Insular Sports Institute of the Cabildo de Gran Canaria has thanked the management of the center for giving them the possibility to continue carrying the benefits of a discipline such as bodyboarding to the youngest, transmitting the value of healthy competitiveness and outdoor sports and teaching them to value the fact of having a world-renowned wave in their own land, the wave of El Frontón.
0
Esta web utiliza cookies, puede ver aquí la Política de Cookies. Si continúa navegando, está aceptándola.